Although my passion is WWII and the "Old West," I'm still pretty much all over the map and the timeline of American History. (The "Roving Historian" is not just a physical thing, eh?) I took note of a couple of interesting news items concerning the Vietnam War this morning.  Several "this day in history" type newsletters and websites informed me that the Paris Peace Accords, the cease fire agreement that effectively ended the Vietnam War officially for the United States, was signed forty years ago yesterday, January 27, 1973. The reality was that combat for American soldiers would go on a little while longer. The other piece of news was from the New York Times. They reported that Pulitzer Prize-winning historian and journalist Stanley Karnow, a chronicler of the Vietnam War, passed away on the same day.

It is difficult for me to accept an exact date for the beginning of the Vietnam War as it pertains to the United States perspective. We had military advisers in South Vietnam as early as 1950 (one of them was my uncle, a veteran of both Korea and the early years of Vietnam). According to the Vietnam Era Veterans' Readustment Assistance Act of 1974, a Vietnam Veteran is, with a few prerequisites, anyone who served in Vietnam from February 28, 1961 through May 7, 1975.

I know what you're thinking, the dates don't match do they? Well, despite the signing of the Paris Peace Accords by all the parties involved, fighting in Vietnam continued, but formal combat operations were brought to a close by August of that year, 1973. The North Vietnamese Army (NVA) captured Saigon, the South Vietnamese capital in April 1975, marking the actual end of the Vietnam War. The U.S. Census Bureau reported in 2004 that there are 8.2 million "Vietnam Era Veterans" in the United States, 2.59 million of those served "in country." There were 58,282 Americans known to be killed in the Vietnam War and over 300,000 wounded. As many as 779 spent time as a Prisoner of War (POW), 660 of those were either freed or escaped. As many as 1,655 Americans are still unaccounted for and remain listed as "Missing in Action" or MIA.

Stanley Karnow was a correspondent in Southeast Asia for thirty years. He wrote for publications like the Time, Life, The Saturday Evening Post, The Washington Post, and NBC News. After leaving journalism, he wrote history books. I, in my humble opinion, think his 1983 book, "Vietnam: A History," was the definitive work on the conflict. I enjoyed it because there was no subtext or bias, just factual reporting in a readable voice. Others must have agreed, because the book was the basis for the 13-hour PBS documentary series "Vietnam: A Television History" for the American Experience program. The book was a bestseller but the television series was even more popular, winning six Emmy Awards, a Peabody, a Polk, and a DuPont Columbia Award. Karnow went on to publish other works on subjects pertaining to Vietnam and other facets of American Foreign Policy. He won the Pulitzer Prize for his 1989 book "In Our Image: America's Empire in the Philippines." Mr. Karnow died Sunday at the age of 87.

509th PIB Update: A Gift From Down Under 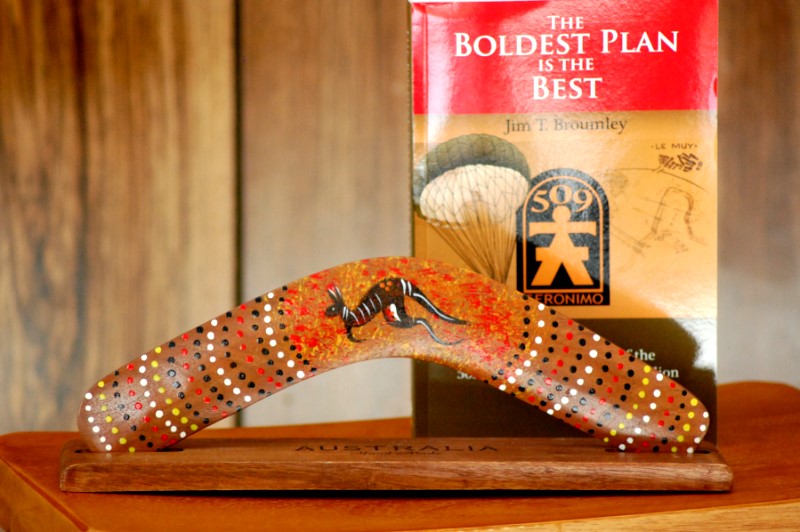 My mail carrier brought me a real surprise this afternoon. A reminder of a friend in Australia that I have yet to meet in person. I was contacted last November by  Frank, who lives in a suburb of Adelaide, South Australia, concerning a research effort he was participating in. I never told Frank that my sister-in-law and her husband live near Adelaide, so through some weird association in my mind, I just had to help out. Just kidding..you know that I have to jump in on anything having to do with researching the 509th Parachute Infantry Battalion. ;-)

You see, Frank has a friend who is the nephew of Kenneth Edney, a British paratrooper during WWII who happened to be killed in action at Anzio while he was with the Geronimos. Frank is helping his friend research the circumstances that led Edney to be with the 509th at Anzio, where no British Airborne units were deployed. There is also some confusion as to whether or not Private Edney was killed in action or taken prisoner and later died of his wounds. Kenneth Edney is mentioned in Richard Fisco's book, "Your Lives Will Be Beautiful," only in passing. Fisco mentions that he was with his scout section and again later, describing the circumstances of his death while on patrol in the area of Carano, Italy on January 30, 1944. My new friends in Australia report to have some documentation of other accounts that conflict with what Fisco remembered happening that day. I did not find Private Edney's name in any of the sources I used for "The Boldest Plan is the Best." I have to assume that he was with the Gingerbread men in an "unofficial" status. The questions I would really like to see answered is why was Private Edney with the 509th PIB at Anzio and under what authority? If anyone has any information about Private Kenneth Edney, his relationship and service with the 509th Parachute Infantry at Anzio, or in prior campaigns, I would certainly appreciate an email.

Back to the boomerang:  So during our correspondence we traded a few emails and I signed a copy of the book for him. As token of appreciation Frank sent me a boomerang! I LOVE IT! Actually, I'm looking at it right now sitting on a shelf over my desk. You know, the best thing about the adventure of researching and writing a history book is the contact with the readers and meeting people who share your interest in that piece of history that is so important to you both. Thank you, Frank. That was a classy gesture. I wish you good luck in solving your "history mystery" and I hope I have the opportunity to travel "down under" one day to meet you in person.
Posted by Jim Broumley at January 11, 2013 No comments:

Book Review of "The Fort" by Bernard Cornwell

As you know I enjoy a good historical fiction. The closer the plot is to the historical record the better. One of the books that really turned me on to history years ago was the Killer Angels by Michael Shaara (the greatest historical fiction book of all time, in my humble opinion) and I still run out and pay full price for hard cover as soon as anything by Jeff Shaara is released. I was pleasantly surprised when one of my holiday reads, The Fort by Bernard Cornwell, turned out to be factual historical fiction, a really exciting tale well told and with only minor exceptions, an accurate historical narrative.

Bernard Cornwell is a British author most well known (to me anyway) for his immensely popular Richard Sharpe series about the Napoleonic Wars. He has also written series in the foreground of post-Roman Briton, the Hundred Years War, and Ninth Century England. Occasionally he does venture into American history. I've read a couple of Cornwell's books previously. Namely "Rebel," the first is a series about the Civil War, and "Redcoat" that is set in the American Revolution. Both books were enjoyable reads, but were only a fiction story set in the period. I found a hardback copy of "The Fort" at my library's used book sale recently. I thought it would be the same as the other Cornwell novels - certainly worth the $1 I paid for it - and would make a good Christmas vacation book. I was wrong.

A narrative of the American Revolution, "The Fort" turned out to be Shaara-esque historical fiction. The story is a retelling of the Penobscot Expedition of 1779, where Massachusetts militia and naval vessels sailed to the Penobscot River in (present day) Maine to expel British forces who had recently arrived there to construct a fort and establish a base for naval operations. Upon arrival the Americans outnumbered the British defenders in their woefully unfinished fort and had the initiative. However, the initiative is lost through a series of incompetent decisions on the part of the American militia commander, and lack of action on the part of both him and the American naval commander, born of stubborn pride. The British forces, led by a professional soldier, are able to hold out for weeks until rescue arrives in the form of British warships dispatched from New York. The entire American fleet is lost and the adventure is arguably the worst American naval disaster until Pearl Harbor. In case that isn't interesting enough, the American artillery is commanded by a Lieutenant Colonel of militia by the name of Paul Revere. In this novel as in real life, Revere's performance on this operation does not exactly make his country proud or live up to the reputation that is evolved by Longfellow' poem.

Cornwell provides a section of historical notes at the end of the novel that provides the background of the Penobscot Expedition. He also points out the few places where he "took artistic license" to advance the story. The main departures being how many times the Americans tried to lure the British out of their fortifications in small numbers in order to ambush them, and who was present at a truce meeting to inquire about a wounded and captured officer.

I assume that using a factual plot line from history is new, or certainly seldom used vehicle for Cornwell. That's not to say that his other books are not well researched, I believe they are. I'm saying that he is good at choosing, researching, then re-telling a historical narrative. I enjoyed this book and I learned about an event in our country's history that I dare claim has been down played? This book is getting the best recommendation I can give a novel: I'm sending it to my dad to read.

I thought the "characters" in this novel were well developed and the book itself was fast paced. Unfortunately, the most disappointing thing about "The Fort" for me was reading the reaction to the book of the one and two-star reviews on Amazon. I wonder how a person can be critical of the plot and characters of a story that is true? I hope Mr. Cornwell writes more books like this. "The Fort" is a keeper, and it is going on the shelf right next to my collection of Shaara novels. ;-)
Posted by Jim Broumley at January 01, 2013 No comments: