Of course I have to add my voice to all of those who are lamenting that we as an American society have forgotten (or really don't value) the real meaning of Memorial Day. I went for a bicycle ride this morning. There happened to be a group from a local church who were doing an organized walk down the bike trail to honor veterans. That's great. However, some of the folks had written inspirational messages in chalk on the path. That's fine too. But one of them said "Have a Happy Memorial Day." I always cringe when I hear that. As this video from the History Channel states that Memorial Day is our most solemn holiday. Now I'm no stick in the mud. Of course I realize that this weekend is the unofficial start of summer and that most people will be out at a barbecue. Heck, I took advantage of the holiday to take an extra long bicycle ride. But please folks, take a moment to think about our veterans, particularly those who have died and are still suffering from wounds. And then enjoy the weekend.

The History of Memorial Day:

This Book Review and Recommendation is on "Eighty Days: Nellie Bly and Elizabeth Bisland's History-Making Race Around The World" by Matthew Goodman.

By the 1880s, the world was getting smaller. Communication was facilitated by the telegraph and soon the telephone would take over. Transportation was almost reliable with regular railroad and steamship schedules. We were on the verge of the the world we would know today, however, during this period mass media was comprised of newspapers and magazines. Daily newspapers competed with each other for the most readers and to beat the competition they needed the most sensational stories possible. If they couldn't find them, sometimes they created them.

In 1873 Jules Verne published his novel "Around the World in 80 days" and it was a hit worldwide. The story is still popular today, with a couple of noteworthy movie interpretations.  By 1889 there were those who thought that the record set by Verne's fictional adventurer, Phileas Fogg could be beaten. One of those was newspaper magnate Joseph Pulitzer, owner of the New York World. Pulitzer chose to send his only female feature reporter, Nellie Bly, on an around the world trip. The goal was to make it back to New York in 75 days.

Nellie Bly was a ground breaking investigative reporter. In a Victorian era in which society viewed women as not too bright, not too tough, and better off staying at home, Nellie Bly was one of the few female reporters who were not chained to the society column. She first gained notoriety by going undercover to expose corruption in an insane asylum. Pulitzer sent her on her trip heading east across the Atlantic on November 14, 1889. 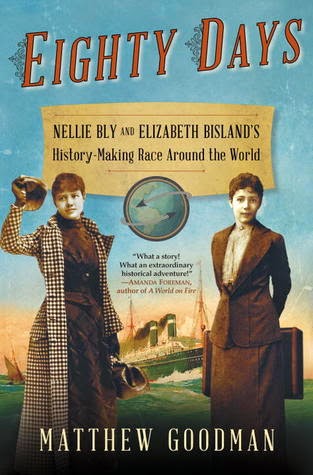 Unknown to Bly, on the same day The Cosmopolitan magazine sent their own female traveler, a literary essayist by the name of Elizabeth Bisland. Thinking there would be an advantage, Bisland's editor sent her west. The race was on and the world couldn't read enough about it.

I admit that when I think about the 1880s, my mind immediately jumps to the wild west, or the Indian wars. I should never limit myself like that, and I wish I had read this book sooner. "Eighty Days" is an enjoyable read that will expose the reader to what life was like along the travelers' routes during this time of European powers (particularly Great Britain) controlling transportation and commerce around the world. You will learn about steamships and railroads, social class, and the mass media of the day. All this is most palatable as the background to the story of the race around the world. You might also come to realize as I did that this period of time, over 125 years ago, was both vastly different and eerily similar to our world today.

"Eighty Days" is women's history, it's social history, and it's just plain fun and interesting. I highly recommend it for your vacation reading list.
Posted by Jim Broumley at May 21, 2014 No comments: