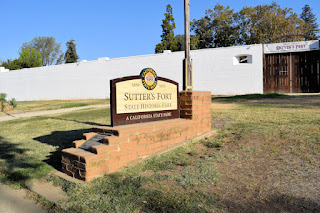 One of my favorite historical fantasies includes the wonder of what certain places in California looked like before the modern world took over. I would love to be able to go back in time as an immigrant to California in the 1840s and be able to experience the sight of the Sacramento Valley before there was a city of Sacramento. Well, a trip to Sutter’s Fort State Historic Park doesn’t make that visualization any easier. The park is located in a quiet neighborhood on the corner of L Street and 28th, just a block or so west of Interstate 80. The fort used to be in the middle of rolling grassland in sight of the American River to the north and the Sacramento River to the west. Now it is surrounded by residential streets of Sacramento, less than two miles from the state capital. 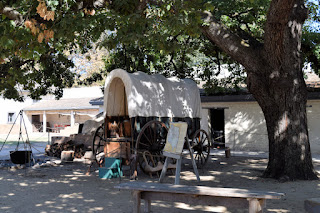 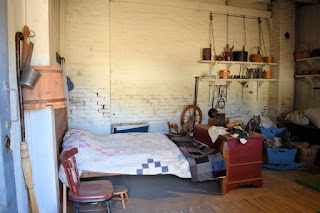 Johann Augustus Sutter left his family in Switzerland and came to America in 1834 to escape debts and gain a fresh start. He was reportedly a huckster with a tendency to inflate his own resume, but by hook or crook he made it to California in 1839. When Sutter saw the land around the American River, he started making plans to build a farming and ranching empire. He sold his plan to the Mexican government of California and not only won Mexican citizenship in 1840, but also a land grant of 48,827 acres the following year. All he had to do was maintain order among the local Indians. He was also authorized to issue land grants and passports to American immigrants to California.

With the help of Native-American labor, Sutter built his fort with adobe walls that were two and half feet thick. The compound was reported to be 425 feet by 175 feet. Inside the fort there were carpenter and blacksmith shops, a gunsmith, a distillery, bakery, grist mill, and a blanket factory. Over the next several years, Sutter welcomed immigrants arriving over the California trail. Many new arrivals went to work for him. Eventually Sutter’s “New Helvetia” would encompass approximately 191,000 acres.

When James Marshall brought the gold nuggets to the fort in1848, Sutter initially tried to keep the discovery a secret. But once word got out, the flood of fortune seekers overwhelmed him and his holdings. Sutter lost his empire faster than he built
it. By the 1850s Sutter’s Fort was in ruins. The site was bought by the Native Sons of the Golden West and the fort was rebuilt in the 1890s. It then became part of the California State Park system in 1947. 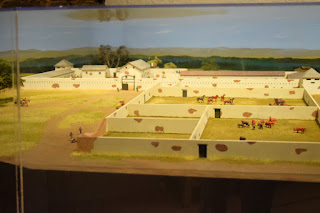 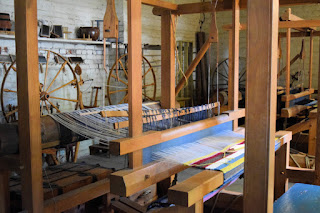 Although the park was surrounded by the growth of Sacramento long ago, don’t let that give you the impression that this is not an enjoyable park to visit. And if I was going to recommend a starting point for a California Gold Rush trip, this would be the place, followed by a drive up to the Marshall Discovery site. For one thing, the drive up to Coloma would give you a feel for the expanse of land that was under Sutter’s control, if even for a brief time. The fort itself is a real treat to walk through. It is on par with the mission at La Purisma for the re-creation of the shops. There are plenty of artifacts in each to view as well as a period wagon. Check the park website for a schedule of events. If possible, visit on a day when one of the “living history” events is taking place. And while outside the fort there is a quiet modern neighborhood, inside it is easy to transport yourself back to the 1840s. Imagine what an oasis this settlement must have been after arduous months on the trail.

We had a rather warm couple of days after Christmas, so Sheila and I took the opportunity to drive up the coast to Mendocino County and check out Fort Ross State Historic Park. This place has been on my radar for several years, and since it is too far for a day trip from our house, we made a weekend out of it, staying in Mendocino and visiting the Point Cabrillo Light Station State Historic Park (which I’ll tell you about in the next post).

Fort Ross is located on the northern California coast, an approximately 2-hour drive north of San Francisco along Highway 1. The area receives about 44 inches of rain a year, 35 of it between November and April. So typically a visitor in the winter would take the chance of encountering coastal storms with rain and gale force winds. However, on the day that we visited we hit the weather jackpot with the sun shining, highs in the upper 50s and a very gentle breeze.

Russians had been crossing the Bering Strait in search of furs since the middle of the 18th century. By the end of the 1700s, the Russian-American Company had settlements from Kodiak Island in the Aleutians to Sitka in present-day Alaska. Operations expanded with the contracting of American ship captains to use native Alaskans to hunt sea otters along the California coast. To help in these operations, the Russians chose to build a settlement at Metini, 18 miles north of Bodega Bay. The Russians arrived in 1812 with 25 Russians and 80 Alaskans, who built the first houses and a stockade. The site was populated with a native American village, plenty of fresh water, forage, and pasture. There were nearby forests for an ample supply of wood, and best of all, since they were technically encroaching on Spanish territory, the site was defensible. They named it Fort Ross, to honor Imperial Russia, or Rossiia.

As it turned out, a defense was not necessary. The site was about sixty miles from the nearest Spanish mission, in Sonoma, and eighty-five miles from the Presidio at San Francisco over rough terrain. Moreover, the Spanish (and later the Mexican Californios) seemed to be more interested in trading with, rather than expelling the Russians. Which is a good thing, since the marine mammal population began to be depleted by over hunting by 1820. Along with trading and hunting fur, the settlement also farmed and ranched. They were productive enough to send foodstuff to their outposts in Alaska. In 1841 the Russian-American Company sold their holdings to John Sutter, of Sutter’s Fort fame. After the Gold Rush and the American annexation of California, the area was ranched by a succession of owners that ended with the property being transferred to the State of California in 1906. This makes Fort Ross one of the oldest California State Parks.

Fort Ross is definitely a destination. I highly recommend a picnic lunch, which is what we chose to do. The nearest inexpensive restaurant is more than an hour’s drive in either direction. But picnicking is really the way to go if the weather is nice, which it was on the day we visited. Besides the drive, give yourself a half a day to go through the visitor’s center and the grounds. Along with the buildings and the stockade, take the time to walk out to the sea cliff and sit on the bench for a little while.