Learn About the Maritime History of the Pacific Northwest in Astoria, Oregon.

Astoria, Oregon, is located near the mouth of the Columbia River that creates the border between the states of Washington and Oregon. Astoria, the oldest city in Oregon, is an interesting and fun place to visit. Anyone who is on a Lewis and Clark pilgrimage is going to stay there of course. But there is a rich history about this town that goes way beyond the Corps of Discovery.

The Lewis and Clark Expedition spent the winter of 1805-06 at Fort Clatsop that they built just four miles to the southwest of modern-day Astoria. In 1811 fur trappers of the American Fur Company, owned by John Jacob Astor, established Fort Astoria where the city is today. Astoria is a deep-water port whose location on the Pacific coast made it a thriving resource town since then. Along with the fur industry, there is the timber industry and fish canneries for processing locally caught salmon. As you can imagine, not only the shipping of these commodities but the fishing industry as well creates a strong maritime history in Astoria. Oh, yes, and do not forget the Columbia bar.

Those of you not familiar with the area might be asking what the Columbia bar is exactly. Well, as the Columbia flows over 1200 miles all the way from Canada to the Pacific, it picks up sediment, as most rivers tend to do. As the waters of the Columbia hit the Pacific Ocean, it slows. When it does it drops the sediment creating what they call a “bar.” The Columbia Bar is an area about 3 miles wide and 6 miles long where the river enters the ocean. Because the bar creates shallows, the waters there tend to be rough and prone to a lot of unusual waves and currents. Plus, the sediment in the bar is always shifting around. That’s why large container ships need a river pilot to guide them into port. Moreover, combine the dangers of the bar with the naturally crappy weather of the Pacific Northwest and you’ve got some challenges. There are so many shipwrecks historically around this area (over 2,000 since 1792) that it has earned the nickname of the “Graveyard of the Pacific.”

This is where the Columbia River Maritime Museum comes in. This is a must-see when you visit Astoria. Most of the exhibits are indoors so don’t worry about the weather (oh, yeah, it rains a lot in Astoria). We made our trip pre-covid, but despite the pandemic, the museum is open with protocols. You will see exhibits on each of the industries that are a part of the history of this area. Particularly interesting to me is the information about the bar. Such a historically dangerous spot that had to be conquered (still true today) in order to exploit the resources of this region and on an individual level, earn a living. You’ll learn what a “bar pilot” does, and that there are only about 16 of these specialists working out of Astoria today. There is also a fine exhibit honoring the work of the United States Coast Guard in and around the Columbia River Bar.

When we visited Astoria, we stayed at the River Walk Inn, one of several hotels that provide a view of the marina from your room (nice!). From the hotel, you are able to catch a trolley that runs the length of the city with a stop at the Maritime Museum. The entry fee is a little pricey at $16 for adults, but that’s probably because I think all museums should be free. Regardless, the museum is worth it. Add it to your itinerary along with your pilgrimage to Fort Clatsop.

The Civil War-Era Fort under the Golden Gate Bridge 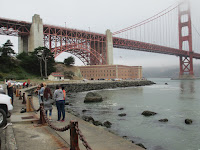 Did you know that there was a Civil War-era fort under the Golden Gate Bridge? I realize that at times I can be slow on the uptake, but I didn’t know about Fort Point until just a few years ago. And I grew up in California! How could I not notice? I’ve driven over the bridge several times in my life. The first time way back in high school. When I was in the army, I even flew a helicopter from Camp Roberts to the Presidio in San Francisco – didn’t notice it then. Finally, Fort Point came on the radar several years ago when I visited the Presidio as a tourist. Who knew? 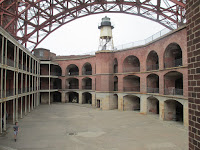 The history of the site goes back to the late 1700s. The Spanish were worried about encroachment into California by Russia and Great Britain. They built a fort on a cliff at the southern point of the narrowest entry to the bay. That would later be known as the “Golden Gate.” The fort, Castillo de San Joaquin, was completed in 1794, was made of adobe walls, and mounted from 9 to 13 cannons. When Mexico gained independence from Spain, the Mexican army moved to Sonoma and let the fort deteriorate.

At some point during the Spanish and Mexican eras, the cliff that the fort was located on was known as the Punta del Cantil Blanco (point of the white cliff) became known as Punta del Castillo (Castle Point). After the Mexican-American war and the United States gained control of California in 1848, the name was carried over as “Fort Point.” Soon the Gold Rush was in full swing, California became a state in 1850, and the United States now needed to protect the bay. A series of defensive fortifications were proposed that included Alcatraz Island, Fort Mason (located adjacent to Fisherman’s Wharf), and Fort Point. 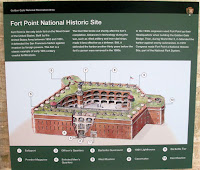 The construction on Fort Point began in 1853. The first task was to knock down the cliff and build the fort near sea level. The idea was that guns placed in the first level of the fort could skip cannonballs along the ocean and hit ships at the waterline. Two hundred former gold miners were employed on the construction of the fort for eight years, finishing it in time to be garrisoned just before the start of the American Civil War in 1861. The fort is constructed with seven-foot-thick walls and three levels, or tiers, that built with a reinforcing arch. The fort could aim 126 guns at any ship passing through the narrow Golden Gate, although during the Civil War there were only 55. 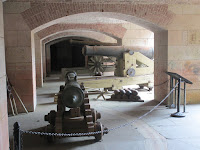 Fort Point never fired a shot in anger. Time and technology made the fort obsolete. Navies of the world moved on to ships made of iron and steel. By the 1890s the smoothbore cannons at Fort Point were scrapped in favor of rifled, larger, coast artillery emplaced in concrete batteries at Fort Winfield Scott on the west side of the Presidio. Fort Point was used as a barracks for a time until it fell into disrepair. Recommendations to have the fort demolished in the 1920s were turned down. The fort was left standing even as the Golden Gate Bridge was built over it in the 1930s. After World War II, efforts were made to preserve the fort. In October of 1970, President Nixon declared Fort Point a National Historic Site.

Read complete histories of Fort Point at the National Park Service website, the Presidio San Francisco website, or on Wikipedia. 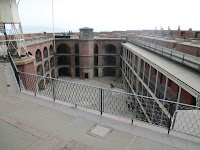 Fort Point is well worth the trip alone. But certainly, be sure to put it on your itinerary when you plan a trip to San Francisco. I enjoyed it more than exploring the coastal artillery batteries at the Presidio. Those coastal defenses built in the early twentieth century are common. I’ve also visited them at the mouth of the Columbia River and protecting the entrance to the Puget Sound. But on the west coast, Fort Point is the only one of its kind. There are no other Civil War-era forts, well preserved, on the west coast. I was fascinated by the architecture of the fort and the technology for the time that it was built. During the summer months there might be living historians or reenactor groups at the fort. Check with the NPS website. Oh, and bring a jacket. You know the old joke: “The coldest winter I ever spent was a summer in San Francisco.” 😎
Posted by Jim Broumley at February 15, 2021 No comments: