A History Mystery: Who's in first?

I still keep in touch with my friends at the Friends of the Ballard Locks (of FOBL for short). For those of you new to this blog, we started our own historical society of volunteers who are putting together an archive at the Hiram Chittenden Locks in Seattle, Washington. If you like, you can catch up on the project from the first post about the project. Well, I couldn't be more proud of the way the group has flourished since I left Seattle in August of last year. In fact, they've been presented with a little history mystery by a local resident. 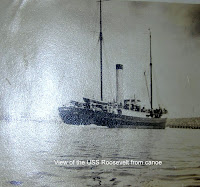 The Locks were formally opened on July 4, 1917 with a grand celebration. The "official" first ship through what was then known simply as the Government Locks, was the steamship Roosevelt. However, the FOBL was recently contacted by the daughter of Elmer Reed who always maintained that HE piloted the first vessel through the Locks on that opening day. Elmer was a local outdoor enthusiast with a passion for canoeing. When the gates of the locks were opened to allow boats into the canal leading to Lake Union, Elmer allegedly jumped in front of the Roosevelt...in his canoe! 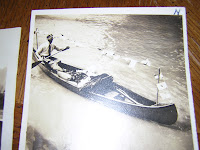 But here's the rub. There are pictures of boats large and small on opening day. There are pictures of rowboats and canoes. We have a picture of Elmer in his canoe and we have a picture of the Roosevelt taken from Elmer's canoe. Unfortunately, we don't have any documentation, written or photographic, that Elmer's canoe was the first vessel to enter Salmon Bay when the Locks opened. And now we have a mystery to solve. Who was in first? Was it Captain E. Blerd piloting the steamship Roosevelt or Seattle's own Elmer Reed?
So we're putting out the call for help. Can you help to prove that Elmer Reed was the first person out of the Government Locks in Seattle on Opening Day, 1917? If you have any information to contribute, OR if you're in the Seattle area and would like to stop by for a visit, the Friends of the Ballard Locks are a great bunch of people who are doin' history. Contact them through Susan Connole at susanatthelocks@gmail.com.
All images courtesy of the Friends of the Ballard Locks and/or US Army Corps of Engineers. Please do not duplicate without permission.

Getting Out of the Den

Spring is here in Northern Michigan and all of the snow is gone from the ground. It’s time for us all to crawl out of our dens after a long winter hibernation. It’s our first year here so we have to go with what the neighbors tell us, and what we get in the news. Apparently, it was a very mild winter up here at the tip of the mitt. Normally the snow is on the ground until the end of March. I get the impression that it is the truth, as most of the local museums and historical societies are still closed until later next month. I don’t think that their budgets are prepared for an early spring. However, we’re still getting out and learning new things about this part of the country.

For example, did you ever hear of a pastie? No, not the uniform item worn by exotic dancers. This pastie is pronounced with a “soft a.” It’s a meat and vegetable pie that is popular in Northern Michigan and the Upper Peninsula. It’s kind of like a turnover, only with beef or chicken, etc. The story goes that it became popular with Cornish miners of England. Their wives would cook up this “balanced meal in a crust” and send their men off to work with their lunch wrapped in yesterday’s newspaper. When the immigrants came to the Upper Peninsula to work in the mines, they brought the pastie with them and the rest, as they say, is history.

I enjoy the history behind local food, but probably I like eating the food more. We tried one of these pasties a couple of weeks ago at Hunt’s Mackinaw Pastie & Cookie Company in Mackinaw. This restaurant was featured on the Travel Channel, although I didn’t know that at the time we stopped in. Lucky for us, they were the only restaurant we found open on the afternoon we went to look at the ice under the Mackinac Bridge. Nevertheless, that does not mean we settled. Unlike the picture of pasties in an English bakery here, we Americans smother ours in gravy and have a little coleslaw on the side. Pie crust and beef, covered in gravy, what’s not to love?! No, the beef pastie was tasty and I would highly recommend you give one a try. This can go in my “good stuff” file along with the shoe-fly pie from Adams County, Pennsylvania, the tri-tip roast of Fresno, California, and there will never be another reuben sandwich like in that corner market in Port Townsend, Washington.

We explored down the lakeshore on the west side of Michigan last weekend, visiting Manistee and Ludington. I’ll leave you with pictures of the breakwater in Ludington, Michigan. It was a windy day last Saturday, and the breakwater was doing its job.
Posted by Jim Broumley at April 13, 2010 No comments:

I must admit my ignorance. Before yesterday, I did not know who the “Borinqueneers” were, or the history of the 65th Infantry Regiment. Now that I am enlightened to the contributions of this military unit, I had to share the information with you. First, hear the how and the why that led me to read a little bit about this historic unit. 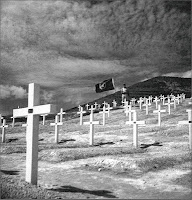 I have a particular interest in the Korean War, as my father was a combat veteran of that conflict, besides my being a military historian. Korea came up on my radar last week due to an article in the NY Times that tells us that North Korea is threatening reprisals if South Korea and the United States do not stop civilian tours to view the Demilitarized Zone (DMZ). As we approach the 60th anniversary of the beginning of the Korean War (June 25, 1950) it is appropriate that we take the time to remember the sacrifices of the veterans who have served in that “forgotten war.” Remember that not only do we still have troops stationed in South Korea, but also that the Korean War technically is still going on. Hostilities ceased with the signing of an armistice on July 27, 1953, but the war was never officially ended.
[Photo is of a U.N. cemetary in Pusan, Korea, 1950. Image archived at the Army Heritage and Education Center in Carlisle, PA.]
With that motivation, I searched the NY Times for other recent articles about Korea and came across the obituary for Modesto Cartagena, who as a staff sergeant serving with the 65th Infantry during the Korean War was awarded the Distinguished Service Cross and is the most decorated Puerto Rican soldier in history. Mr. Cartagena passed away at his home in Puerto Rico on March 2, 2010 at the age of 87. His obituary in the Times explained that the 65th Infantry was an all-volunteer unit from Puerto Rico. Since I had never heard of this unit of Puerto Ricans, I had to satisfy my curiosity.
A simple Google search provided me with the story. Here is a link to the Borinqueneers’ website that contains photographs and archival video. In addition, here is a link to an excellent Wikipedia article summarizing the history of the unit. It would seem that the 65th Infantry Regiment experienced similar prejudices as other ethnic units in the history of the United States Army. Moreover, like the 442nd Regimental Combat Team (Japanese-American), the 92nd Infantry Division (African-American), and others, this unit distinguished itself beyond all expectations.
The unit’s nickname, “Borinqueneers,” is a combination of the words Borinquen, which is what the Puerto Rican natives called their island before the arrival of the Spanish, and Buccaneers. The soldiers coined this name during an exhausting month long boat trip from Puerto Rico to Pusan, Korea in September 1950.
The unit met its greatest challenges in Korea. Many new officers transferred into the unit by the army where white continentals who could not speak Spanish, the native language of the common soldier in the unit. After more than two years of distinguished service in combat, an action occurred in which one of the regiment’s line companies was pushed off a hill by Chinese forces. A new Regimental Commander, a continental, accused the unit of cowardice. The commander ordered the unit to stop calling themselves Borinqueneers, took away their special ration of beans and rice, ordered the men to shave off their distinctive mustaches, and even had one soldier wear a sign that said, “I am a coward.” Due to the humiliation, combat exhaustion, and cultural barriers, it is understandable that the unit rebelled and refused to continue fighting. Ninety-one of the unit members were found guilty at court martial and sentenced to prison. Later, the sentences were remitted through intervention by the Puerto Rican government. Though the men who were court martialed were pardoned, there currently is a campaign for a formal exoneration.
This “mass court martial” does not take away from the fact that members of the unit were awarded 10 Distinguished Service Crosses, 256 Silver Stars, and 606 Bronze Stars during their time in Korea. The 65th Infantry Regiment earned streamers for nine campaigns during the Korean War. Approximately 61,000 Puerto Ricans served during the Korean War, most of them were volunteers.
The island of Puerto Rico became a U.S. Territory in 1898 at the end of the Spanish-American War. The United States immediately appointed a military governor of the island and the army established a presence there. The Army Appropriation Bill passed by Congress in 1889 authorized the creation of the first unit of “native troops.” The “Porto Rico Provisional Regiment of Infantry” first formed in 1901 would evolve into the 65th Infantry Regiment in the Regular U.S. Army. The unit fought in WWI, WWII, and Korea. The unit was transferred to the Puerto Rico National Guard in 1956, the only active army unit to ever be transferred to the Guard. As National Guard units, members of the 65th Infantry have deployed in support of the Global War on Terror to Iraq, Afghanistan, Guantanamo, and the horn of Africa.
Posted by Jim Broumley at April 01, 2010 No comments: