The latest member of the Roving Historian team joined us a few days ago. Elvis is a Pembroke Welsh Corgi. He's only 10 weeks old, so he has a bit of schooling ahead of him before he joins us on any extended adventures. But being the history geeks that we are, we had to do a fair amount of research on the breed before he came home. Sheila literally read every book (five) on the breed that our local library had. So let us share some of that information with you, a couple of pictures of our baby boy, and a short video.

History of the Pembroke Welsh Corgi

First, to avoid any confusion, there are two types of Corgis and they are distinctly separate dog breeds. The Cardigan Welsh Corgi is the larger of the two. The Cardigans will be ten to thirteen inches tall and probably weigh a bit over thirty pounds. The breed has been around longer than their Pembroke cousins. The Pembroke Welsh Corgi typically won’t be over thirty pounds or twelve inches tall. Both breeds are herding dogs (don’t let the short legs fool you), and as such their temperaments are to be tenacious, outgoing, friendly, bold, playful, protective, affectionate, devoted, alert, companionable, intelligent, and active. Both breeds are small and adorable, but they are not couch potatoes. 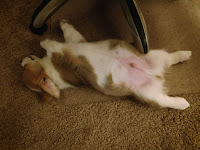 Humans started domesticating the wolf about 15,000 years ago and through selective breeding and training there is evidence that dogs were being used to herd cattle more than 2,000 years ago. The challenge in determining when a specific breed originated is that it was not until the 1800s that specific breeds were recognized and pedigrees were recorded. However, the 10th century is probably the right answer, as archaeologists have found the bones of Corgi-type dogs at a site in Wales that dates to 890 CE.

There are several theories to the origin of the breed. Here’s my favorite origin fable. Welsh legend tells the story of two children playing in the woods when they found two dogs with foxlike faces and short legs. The kids bring the dogs home and their parents told them that they were fairy steeds who draw their carriages and carry the fairies into battle. The gift of the fairies helps the children to do chores around the farm. You can see the marks of the fairy saddles on the backs of the Pembroke Corgis’ backs to this day. (Well, if it ain’t true it ought to be.)

My other favorite origin theory, a little more down to earth, is that Vikings from the Scandinavian countries brought early breeds like the Valhund, the Lundehund, and the Buhund to Wales in the ninth and tenth centuries. There is also the possible influence of the Schipperke and/or early Pomeranian breeds that were brought to Wales by Flemish weavers in the early part of the twelfth century. A couple of the Scandinavian breeds are a bit larger than the Corgi, but with the influence of the shorter legged breeds and selective breeding over the centuries, we have the modern Welsh Corgi. By the 1800s, the Corgi is very popular on farms in Wales, particularly in Pembrokeshire.

The corgi was first seen at a dog show in 1925, the same year that a corgi club was formed in Pembrokeshire. Both the Pembroke and the Cardigan were shown together. Because each breed had their own fans, a separate cardigan club was formed the next year. By 1934 the Kennel Club in Great Britain separated the Pembroke and Cardigan Welsh Corgis into the two separate breeds we have today. 1934 also saw the first corgi registered by the American Kennel Club. The next year the AKC recognized the two separate breeds, Cardigan and Pembroke. The Pembroke Welsh Corgi Club of America is founded in 1936.

A history of the breed is not complete without mentioning the corgi’s most famous fan. Queen Elizabeth of Great Britain was given a corgi puppy for her eighteenth birthday and has been a fan ever since. All of the queen’s dogs descend from that puppy, “Susan,” she received on her birthday in 1944. The video is a bit dated on its information. The Queen no longer has sixteen corgis. As of November 2012, it was reported that Elizabeth owned two corgis, Willow and Holly, and two dorgis (a cross between a Pembroke Welsh Corgi and a Dachshund), Candy and Vulcan. It was reported in July 2015 that the Queen has stopped breeding corgis as she does not wish any to survive her in the event of her death. The last of her corgis passed away in April 2018, marking the first time the Queen has been without a corgi since her eighteenth birthday. She has owned 30 corgis during her reign. Her dorgis are still living at the time of this writing.

The American Kennel Club says that the Pembroke Welsh Corgi is the 18th most popular breed of dog out of the 194 breeds that they recognize. They make a great family pet. But remember that they are a herding dog. They are smart and assertive. Probably not the best choice for families with children under the age of 8. Do not let the small size and adorable looks fool you. Like other herding breeds, they need strong leadership and plenty of exercise. There’s a lot of energy in that small package.