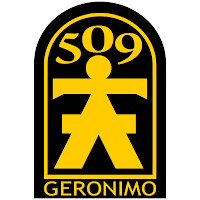 The folks who regularly read this blog know that I’ve been working on a book project for some time now. The subject is the combat history of the 509th Parachute Infantry Battalion during WWII. Along with secondary sources, I’ve completed my search for primary source documents at the Army Heritage and Education Center in Carlisle, Pennsylvania, and the National Archives in College Park, Maryland. I’ve started writing a first draft and I am enjoying the process immensely.
For those who are not familiar with the 509th Parachute Infantry Battalion, they were one of the first battalions of parachutists fielded by the American Army. The 509th, the “Geronimos,” were one of only four independent airborne battalions in U.S. military history. The unit has an amazing list of “firsts.” For example, they were the first airborne unit deployed to England, before the 82nd or 101st Airborne Divisions had been formed. They were also the first airborne unit to make a combat jump (North Africa). The unit jumped behind the lines during our landings at Salerno, Italy, and fought at Anzio. They parachuted into Southern France during Operation Dragoon. The unit also fought in the Battle of the Bulge. Shortly after that, the Army chose to disband the independent airborne battalions and the survivors were used as replacements for other units. The accomplishments of this unit have long been overlooked and underrepresented, hidden in the shadow of the larger airborne regiments and divisions.
I am now looking for the oral histories of the members of this unit that took part in the campaigns of World War II. I have seen the letters written to author William Breuer that are stored in the AHEC and read a few oral histories obtained from other sources. However, I am hoping to obtain the recollections of veterans who have yet to share their stories.
Barry Simpson, the secretary of the 509th Parachute Infantry Association, recently contacted me. He actually heard of the project through this blog. Barry has offered to help me get in touch with the members of that organization who are veterans of WWII. I am most grateful for his offer of assistance. I would also ask any readers that are not affiliated with the 509th organization for their assistance in locating former members of the 509th PIB. If you know a veteran of this unit, please direct them to this blog or if they are not online, please assist them in contacting me.
I’ve created a short survey with several questions to answer. My contact information is on this form. Click this link to download the survey in a PDF format. This is just a starting point, as I am hoping to give the veterans the opportunity to share their stories with us, rather than answer pointed questions. My intent is to donate the responses I receive to the AHEC when this project is complete.
Let me express my gratitude in advance to anyone who can help with this endeavor. Moreover, let me particularly thank the veterans of this great unit for their service to our country.
Posted by Jim Broumley at November 30, 2010 3 comments: