This April 9th marks the 71st anniversary of the 1942 Bataan Death March of WWII. On March 17th of this year, the veterans who suffered during the infamous event were honored at the 24th annual memorial march at White Sands Missile Range in New Mexico.

I just finished writing an introductory chapter for a book on the 503rd Parachute Infantry Regiment during WWII. The subject is the Japanese successes in the beginning of the war, paying particular attention to the fall of the Philippines. (The 503rd Parachute Regimental Combat Team is the unit that took back Corregidor in 1945.) My editor/proof reader/wife, Sheila, now with her radar tuned to the subject, passed on an article in Stars and Stripes to me about an event that honors the veterans of this tragic episode in American military history. As I was unaware of this annual happening, I'd like to share the information with you here, as I'm guessing there is a few readers out there that did not know about the annual Bataan Memorial Death March either.

During the fight for the island nation in early 1942, American and Filipino forces withdrew to the Bataan Peninsula on the north end of the opening to Manila Bay, on the west coast of the island of Luzon. Allied forces, without reinforcement or resupply, held out for almost five months before surrendering on April 9, 1942. Approximately 76,000 Allied soldiers (just short of 12,000 Americans, the rest Filipino) became prisoners of war. Almost a month later, the island fortress of Corregidor in Manila Bay surrendered, with nearly 15,000 (a majority of American) Allied soldiers following their comrades into captivity.

The Japanese force marched their prisoners, who were sick, exhausted, and diseased, over sixty miles non-stop to prison camps in the interior of Luzon. Exact casualty figures are not possible, but it is estimated that between five and ten thousand Filipino soldiers and from six hundred to a thousand Americans died on what became known to history as the "Bataan Death March." Thousands more would die in POW camps before being liberated in 1945. The news of these atrocities of course made it back to the United States. During the war the public was galvanized in their resolve to win the war with "Remember Bataan," "Remember Corregidor," as well as "Remember Pearl Harbor."

For a few years after the end of WWII, Americans acknowledged "Bataan Day" but it fell out of the collective memory in favor of "Pearl Harbor Day" and "V-J Day." April 9th remains a national holiday in the Philippines, known as "The Day of Valor." However, it came to the attention of the Army ROTC detachment at New Mexico State University that there were many veterans of the Bataan Death March living in there state. The 200th and 150th Coast Artillery were units from the New Mexico National Guard that had been mobilized and sent to reinforce the Philippines before the Japanese attack. In 1989 the New Mexico State ROTC cadets organized the first Bataan Memorial Death March through the high desert of the White Sands Missile Range near Las Cruces, NM.

Now in its 24th year, the memorial march is a rough 26.2 miles through the desert at high elevation. Both civilians and soldiers come to march (and many to run) the course to honor those veterans who suffered through the original Death March. This year there were thirteen veterans able to attend the memorial and witness over three thousand take to the route to honor their service and sacrifice. The weather in New Mexico, apparently dry and in the mid-seventies, probably seemed perfect for the event. Compare that to the forecast for Manila, which was 96 degrees with over 60% humidity.

The Bataan Memorial Death March now has a long list of sponsors, most notably the Veterans of Foreign Wars (VFW). But I'd like first throw out a "well done!" to the ROTC cadets who organized this event in the first place. And second, give a shout out to the folks who take the time to travel out to a military reservation out in the desert and gut out twenty-six as their way of showing these veterans that we remember. Keep this on your radar. Who knows, maybe one day we'll see each other there.
Posted by Jim Broumley at March 18, 2013 No comments:

PFC Les Green, B Company, 509th Parachute Infantry Battalion, was one of only 55 men in his battalion left standing at the end of the Battle of the Bulge.

One of the pleasures that come with writing a book like The Boldest Plan is the Best: The Combat History of the 509th Parachute Infantry Battalion during WWII, is the interaction you have with people who read your book and were moved to contact you. I am grateful to those folks and answer every letter and email I receive. Via Facebook, I was contacted by Pat Stephen of Morgan, Utah. Pat lost her father during the Battle of Midway when she was only 4 years old. Her uncle, Leslie Green, served with the Gingerbread Men during WWII. She was 8 years old when he came home from the war. Pat is 74 now and has many fond memories of her uncle. She recently sent me some information and a few pictures of her uncle Les, and I wanted to share those with you here.

Leslie Ervin Green was born on June 23, 1923 in Lebanon, Missouri. At age nineteen, Green was inducted into the United States Army on March 10, 1943 at the Army Induction Center in Arlington, California. Les spent his first thirteen weeks in the Army going through infantry basic training at Camp Roberts, California. That was followed with four weeks at Fort Benning, Georgia for jump school.

Les Green, and likely his whole class that had just completed parachute training, would move to the European Theater as replacements. In September of 1943, Green and his fellow paratroopers, moved from Fort Benning by train to Fort Patrick Henry, New Jersey, and then by convoy to the Port of Oran, in the North African country of Algeria. The trip took twenty-eight days.

From Oran, Green and the other paratrooper replacements moved by rail to the airborne training center that had been set up at Oujda, French Morocco. After weeks of intense training, Green boarded a train once more, this time bound for the Port of Bizerte, Tunisia. From Bizerte a convoy of ships carried Green and his fellow paratroopers to Naples, Italy. 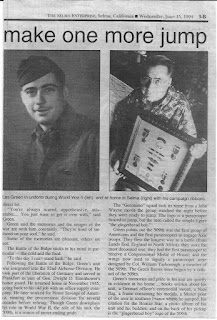 Les Green was assigned as a rifleman in B Company, 509th Parachute Infantry Battalion, who at the time was deployed within the beachhead at Anzio. On February 18, 1944 a small British landing craft put Green and his fellow soldiers ashore at Anzio. This was the beginning of a cumulative 180 days of service on the front lines. After Anzio, Green participated with the 509th PIB in Operation Dragoon, the invasion of southern France. He served in the Maritime Alps. Finally, Les Green fought with the Geronimos in the Battle of the Bulge. Les Green was one of the 55 combat soldiers who were still standing when the Battalion was disbanded.


After the disbanding of the 509th Parachute Infantry Battalion, the survivors were sent to other units. Les served with the 82nd Airborne Division until the end of the war. In occupied Germany, PFC Green was part of General Eisenhower’s honor guard. Leslie Green returned home in November of 1945. He had served in six campaigns. Representing his service, he wore the Combat Infantry Badge, the Purple Heart, and the Bronze Star. During his service with the Geronimos he also earned two Presidential Unit Citations and a unit award of the Croix de Guerre.

Like many of his generation, Leslie Green did not talk much about the war, being fairly humble about his role in it. But his memories of the war and admiration of the men he served with remained. Green worked for Home Savings Bank for several decades before retiring. He told his niece, Pat, one of the highlights of his life was making an honorary parachute jump in 1994, commemorating the fiftieth anniversary of the invasion of southern France. Leslie Ervin Green passed away on February 16, 2011 in Kingsburg, California.


Leslie Green was one of thousands who have been a part of the legacy of the 509th Parachute Infantry, and one of millions who have worn the uniform of the United States military services. Through their service and sacrifice, these people have had an effect on so many others. Their country called, and they went. Those who were able to return lived, and continue to live, among us. They are your next door neighbor; they work down at the bank, or in the grocery store. These men, and women, are not faceless or nameless. Today I wanted to introduce you to one of them.

Ballad of the Green Berets

I fully admit to my love-hate relationship with the History Channel. This morning rather than ranting about the errors and dumbing down of history, I have to give them a thumbs up for their "This Day in History" newsletter. This morning they included a couple of articles that I enjoyed, both about the Vietnam era.

The first was a reminder that today in 1971, the 11th Armored Cavalry Regiment (the Blackhorse) departed Vietnam. The Regiment, minus the 2nd Squadron who stayed in Vietnam for another year, redeployed to Germany. They would spend the next 21 years there patrolling the East German border. If you have read this blog for a while then you know I'm intimately familiar with that part of the unit's history.

The second item that caught my attention was that on this day back in 1966 Staff Sergeant Barry Sadler hit #1 on the charts with his song "Ballad of the Green Berets." I loved this song when I was in elementary school, listening to it over and over again on my parents' 8-track. When my daughter wanted desperately to sleep in and be late to school, I would wake her up by singing this song at the top of my lungs. What kid could sleep through that? I went to YouTube and found a copy to share with you:

What I liked about History Channel's treatment of this was that they pointed out that when this song hit number one, there was still wide spread support for America's involvement in Southeast Asia. The first song that could be called an anti-war song to gain popularity was "For What It's Worth" by Buffalo Springfield that did not come out until 1967. I didn't recognize the title either, but you know it too: "Everybody stop, hey, what's that sound?" I went back to YouTube and found a copy of that as well:

So it made me think that you could use the Billboard Chart of popular music to track popular support for the war in Vietnam. In March of 1966 a "pro military" song goes to number one and is the best selling song of the year, while there are no "anti-war" songs on the charts. The next year, an "anti-war" song appears on the charts and becomes one of the songs most associated with the Vietnam era? Call me a geek, but I thought that was fascinating. Popular culture meets military and political history.
Posted by Jim Broumley at March 05, 2013 No comments: