It has been a busy summer with teaching summer school and getting ready to start teaching history, civics, and economics at a new school in August. But that doesn’t mean we didn’t take the opportunity to take a few day trips around California. One Saturday earlier this summer, Sheila and I took a drive up to Richmond, California, to visit the Rosie the Riveter and WWII on the Home Front National Historical Park.

Richmond, California is just north of Oakland and Hayward on the east side of San Francisco Bay. The area was once heavily industrialized and it has a noteworthy history from World War II. Just a few miles further northeast is the Port Chicago Naval Magazine Memorial (a topic for another trip report) in the city of Martinez, and a little further northeast is the city of Pittsburg, California, where Camp Stoneman was located. Camp Stoneman was a staging area for troops shipping out to the Pacific Theater during WWII and during the Korean War. Notables departing from there included the 503rd PIR during WWII and my dad during the Korean War.

Richmond was an excellent choice for this park. During WWII the city was home to four Kaiser shipyards and a Ford plant that built tanks and jeeps. In all the city could boast 56 different war industries. The yards were built from scratch beginning in 1940. Thousands of workers flocked to California from the Dust Bowl, the South, and all over the United States. The city of Pittsburg grew from a population of 24,000 to 100,000 in a matter of months. Families lived in tents and trailers until the city's infrastructure caught up with the population boom. Housing, schools, and medical facilities had to be built along with the mad rush to produce the equipment of war. Some of the workers had construction experience

from the large Depression era projects like Hoover and Grand Coulee Dams. But very few had any experience building ships and many had no industrial experience at all. The yards on the west coast were integrated. Thousands of workers were African American and Hispanic. Twenty-five percent of the workforce were women, living up to the familiar icon "Rosie the Riveter." And although it was not easy, great strides were made for and by labor, civil rights, and women. People came together to do great things for the war effort. The ultimate example is the Kaiser Shipyard construction of the liberty ship Robert E. Peary in 4 days, 15 hours, and 25 minutes, a world record accomplished in November of 1942. 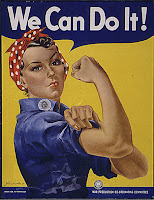 The genius and drive behind these accomplishments was a man named Henry J. Kaiser. Kaiser started out as a road builder in the 1920s. He was a key player in major building projects like the Grand Coulee Dam on the Columbia River during the Depression. Kaiser was an entrepreneur in the truest sense. He bid and won a contract to build ships for Great Britain in 1940 without having a shipyard to build them in. He brought his construction crews down from the Grand Coulee project to begin work on the shipyards in Richmond. When he needed cement and couldn't get it, he started a cement plant. When he needed steel and couldn't get as much as he needed, he built steel mills. When his workers needed medical care he built a hospital and sponsored a health plan, again something never before offered to workers. Kaiser Permanente medical consortium has survived to be one of the giants in the medical services industry today. Henry Kaiser was a problem solver, no doubt about it.

Unfortunately, after the war the Kaiser yards closed. As a result, Richmond went through tough decades of poverty and crime. However, during the latter part of the twentieth century, much of the abandoned industrial infrastructure was removed, and an environmental cleanup took place. Where three of the four Kaiser shipyards stood is now a public marina, park, and blocks of new condos and townhouses. Rosie the Riveter is a partnership park between the National Park Service and the city of Richmond. The city built the Rosie the Riveter memorial in Marina Park in 2000. A bike path connects the memorial to the NPS visitor center next to the Ford plant and Shipyard number three whose buildings are still standing. It is only a one mile walk between the two. It is a pleasant walk with views of the San Francisco skyline. The visitor center is a nice little museum where you will learn more about World War II on the home front and the Kaiser Shipyards. You can also go on board the SS Red Oak Victory, a victory cargo ship being restored and docked at the pier by Shipyard #3.

Still a work in progress, eventually the Rosie the Riveter/WWII Home Front Historical Park will include a sample of worker housing, the child development centers built for Kaiser workers, and the first Kaiser Hospital. It's hard to imagine what the area looked like with four shipyards and a Ford assembly plant all working at full capacity. But the park is certainly worth the trip. To know more, I definitely recommend a book I picked up in the gift shop:
"Build 'Em by the Mile, Cut 'Em off by the Yard, How Henry J. Kaiser and the Rosies Helped Win World War II" by Steve Gilford.

This Book R & R is about "Bunker Hill: A City, A Siege, A Revolution" by Nathaniel Philbrick


I know it sounds incredibly geeky, but I just finished reading Nathaniel Philbrick’s “Bunker Hill,” and I’m watching the HBO series “John Adams,” both on the Fourth of July. Perhaps it is coincidence, but let me briefly tell you how this has come about. 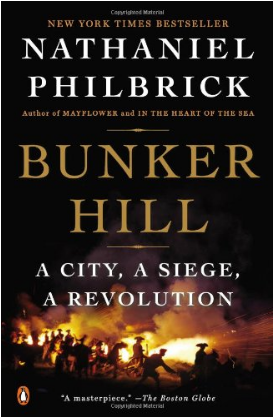 My posts have been few over the last two years due to the fact that I have been completing a masters degree in education and earning my California teaching credential in social studies. Last fall I did my student teaching in US history and economics. The day after that was concluded I began a long term substitution teaching world history for the remainder of the year. I also have the opportunity to teach civics and economics during summer school, which started the week after the spring semester ended. So within the last year I have taught four different classes for the first time. As you can imagine, that required a great deal of preparation time that normally would have been spent reading books of my own choosing. Spending all of that time prepping for classes and grading papers of course did not prevent me from buying new books. My shelves are full of unread titles waiting for their turn.

Nathaniel Philbrick is one of my favorite nonfiction authors. I picked up a copy of Bunker Hill some time ago. Teaching civics this summer brought with it a new excitement for learning about the founding. (I am now working on “Plain, Honest Men” by Richard Beeman.) So I finally picked up Philbrick’s book and it immediately grabbed my attention. Of course, I knew it would. Bunker Hill has the same level of detail that Philbrick put into “The Last Stand” so that while with this book you might not feel like you are with the patriots, you certainly are standing at a window watching the goings on. I actually have a criticism. The book should not have been titled “Bunker Hill” because it gives the potential reader the idea that it is specifically about that battle. I actually asked myself before reading the book, how much do I really need to know about the battle of Bunker Hill? Well, the title is a misnomer.

Bunker Hill, as the subtitle states, is about the siege of Boston. It begins with the arrival of British troops in response to the unrest over the stamp act. It ends with the British withdrawal from the city. In between you will read about the Boston Massacre and the Boston Tea Party, the battles of Lexington and Concord, the formation of the Continental Army and the trials faced by George Washington in attaining his goal of expelling the British from Boston. You will of course read about the battle of Bunker Hill and understand what it was, who took part in it, and what the effects of it were on the larger story of the beginning of the Revolution, although that is actually only a fraction of the book.

At 295 pages, “Bunker Hill” is not a major life commitment. It paces well and keeps the reader’s attention. It’s good history, with no bias, reinterpretation, or analysis. Not only did I enjoy the book, but I feel like I can now see the real history, separated from the modern mythology that has grown up around the founding and the beginning of the revolution. And what does this have to do with binge watching HBO’s “John Adams”? Well…I really did take advantage of the holiday weekend to finish reading “Bunker Hill” and it just put me in the mood to watch “John Adams” again. Am I a geeky patriot or what? But you know, the first hour and a half of that series makes so much more sense now. I understand more of the references made in the dialog now that I have the background on the subject. So this summer, get your patriotic history geek on.