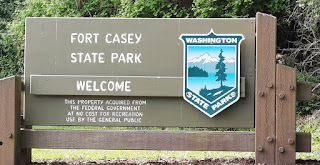 Spring finally sprung here in the Seattle area. We took an unusually nice day off weather-wise and drove to Fort Casey State Park on Whidbey Island, one of our favorite picnic spots. Along with Fort Worden and Fort Flagler state parks, Fort Casey is a former coast artillery position built around the turn of the twentieth century for the defense of Puget Sound. All three state parks are great for hiking, camping, or letting kids play on the old concrete batteries. Each one is around a two-and-a-half-hour drive from Seattle, including sometimes waiting for a ferry. But Fort Casey is my favorite.Fort Casey has always been less crowded than the more noteworthy Fort Worden. Fort Worden, located at Port Townsend was the shooting location for the movie “An Officer and a Gentleman” with Richard Gere. Also, Port Townsend is a picturesque tourist destination. Not that it’s a bad thing, but it brings with it crowds and there is a bit of litter and graffiti on the walls of the batteries. Fort Casey is quiet and clean. As a matter of fact, on our visit we saw that the park is being restored to its original condition in that workers are applying a fresh coat of paint and are mounting two restored “disappearing guns.” This work should be complete by the end of May. 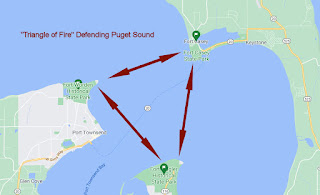 During the second half of the nineteenth century the United States was concerned about the defense of their new territories in the Pacific Northwest, particularly Puget Sound. There was a sense of urgency that came with increased tensions with Spain in the lead-up to the Spanish-American war. A survey of Puget Sound by the Corps of Engineers easily noted that Admiralty Inlet was a narrow gateway into the rest of Puget Sound. In fact, Admiralty Inlet is only about four miles wide. Construction was started in the late 1890s on all three forts, Casey, Worden, and Flagler, that would create a “triangle of fire” for any invading fleet.Fort Casey was activated in 1901. By 1907 there were 34 pieces of coastal artillery sitting 100 feet above sea level. Similar strength was located at the other two points of the triangle. This investment in defense didn’t last very long. The threat of invasion diminished. So much so that during the First World War, 13 of the guns were removed from Fort Casey and sent to France as heavy artillery and rail guns. Battleships got bigger, matching the forts for the size of guns. Also, the advent of the airplane that was able to bomb the forts necessitated removing the cannons and replacing them with anti-aircraft guns during the Second World War. After WWII, Fort Casey stood vacant and fell into disrepair. The fort was officially deactivated in 1953 and was later transferred to the Washington State Parks. If you would like to know more about the defenses of Puget Sound, read this article on HistoryLink.org, or visit the Coastal Artillery Museum at Fort Worden. You also might take a look at the book, "The Pictorial History of Fort Casey" by Terry Buchanan.