...and the California Gold Rush!

If you are a regular reader of this blog then you know that since moving back to California a couple of years ago we've been visiting historical sites around the state while I bone up on my California history. You know that we've visited some of the missions, and a couple of WWII sites. However, we also spent some time this summer visiting sites that have to do with the California Gold Rush.

I'll share our excursion to the gold rush areas of California in a later post. But I wanted to share our trip on Labor Day weekend first. Now you have to understand that typically, historically, usually and almost always, I want to avoid traveling on a holiday like the plague. But this year our anniversary fell on Labor Day and Sheila surprised me with a little history weekend by getting a reservation on a riverboat that is now a floating hotel on the Sacramento River. This would give us the opportunity to see several sites in Sacramento that have been on the history bucket list for some time.

The Delta King Hotel is a restored paddle wheel river boat that plied the waters of the river between San Francisco Bay and Sacramento from 1927 to 1940, and also saw service in WWII. To the best of our knowledge, it is the only hotel that is actually located in Old Town Sacramento. Now, we were looking forward to a nice quiet weekend. I mean, even though it's Labor Day, who goes to Sacramento anyway? Well, it turns out that it would be us and a few thousand of our new friends. See, the hotel called Sheila to confirm the reservation, and tell her that because of the Gold Rush Days festival, they would have valet parking set up at the nearest parking garage and drive us over to the hotel in a golf cart. We were so clueless, we didn't even know that there was a "festival" going on!

Old Town Sacramento is a 28 acre area of restored buildings from the nineteenth century. It is located along Interstate 5, just down from the confluence of the Sacramento and American Rivers. The neighborhood is just a few blocks west of the state capital. This area was the terminus of the pony express and where the idea for the Central Pacific Railroad was hatched. I could argue that this is ground zero for the American era of California history. But like Pioneer Square in Seattle or the Fort Worth Stockyards, it is now more tourist attraction than historic site.

We were actually looking forward to the whole thing. We're early risers and beat the traffic. When we arrived and parked in the garage at around 9 am, there was hardly anyone around, but a line of cars was following us in. The first site that greeted
us when we turned the corner into Old Town as a small detachment of cavalry coming down the street. We wore ourselves out walking around Old Town, visiting the museums there and people watching. There were people dressed in old west attire putting on demonstrations like how to crack a bull whip or staging a gunfight in the street. As expected, it got more and more crowded as the day progressed.

The Gold Rush Days was a fun event, but I must say that it was more about "festival" than history. California has a rich and varied history, but I have yet to see reenactors that compare to sites we've visited back east. There were a lot of anachronisms easily noticed in the outfits of those who were working the streets. But the museums in Sacramento are first rate and I'll tell you about some of those in future posts.

By the late afternoon we were ready to collapse and one of the best parts of the weekend was our stay at the Delta King. The room was like staying in a museum, but it was very comfortable and had the necessary modern conveniences of cable television and wifi. We had lunch and breakfast the next morning in hotel's excellent restaurant (I recommend the fish and chips). But we were so exhausted from the day's activities that we had a pizza delivered for dinner, which if you wanted to you could eat at a cafe table set up on deck right outside of your stateroom.

If you are going to have a trip through California Gold Rush History, Old Town Sacramento is a good place to start. The California Railroad Museum is worth the visit to Sacramento alone. The small Wells Fargo museum is also good. Walk the streets, buy a t-shirt and some chocolate, and if you want to stay the night, choose the Delta King rather than the downtown motels. Enjoy your stay. Then head two miles across town to Sutter's Fort to start your real gold rush history trip.
Posted by Jim Broumley at September 11, 2016 No comments: 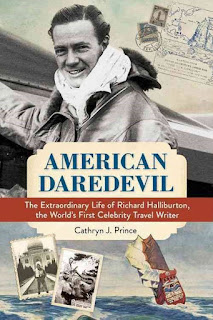 In “American Daredevil,” author Cathryn Prince quotes writer Joe David Brown who said, “If Richard Halliburton had not actually lived, no novelist or satirist would dare have invented him. Any fictional character who had the time, ability, or inclination to do all the exciting, grueling, and often ridiculous things he did simply would not be believable.” This was written in Sports Illustrated twenty-four years after Halliburton disappeared at sea in 1939 while trying to sail a Chinese junk from Hong Kong to San Francisco.

Halliburton was the first adventure travel writer. Travel writing was an unconventional if not unheard of career when he graduated from Princeton University in 1921. Halliburton really pioneered the field of adventure journalism. He documented adventures during the 1920s and 30s, like retracing the path of the Spanish Conquistador Cortex, climbing Mount Fuji, or swimming the Panama Canal. He was dashing. He was handsome. He wrote books and gave lectures. The media of the day covered his exploits. Travel writers like Charles Kuralt and Paul Theroux read his work when they were young. And although he is all but unknown today, he influenced a generation.

When Chicago Review Press offered me a copy of “American Daredevil” to review, I readily accepted because Cathryn Prince is not only a Facebook friend, but also the author of the excellent book “Death in the Baltic.” I have to admit my ignorance in that I had never heard of Richard Halliburton before reading about his life in this outstanding book. However, once I started reading about this guy I was hooked. The book is well written of course and reads at the same comfortable pace and author's voice as “Death in the Baltic.” The reader feels like they are on the adventures with Dick Halliburton, a man who “seized the day.” One reason that you also feel close to the action is that Cathryn spins the tale of both Halliburton’s professional persona as well as his private life. This book gets two thumbs up for making history interesting and providing a look at what was popular culture for our society in the first half of the twentieth century, before television and the Internet. I plan on sharing the life of Richard Halliburton with my US History class and adding “American Daredevil” to our classroom library.
Posted by Jim Broumley at September 03, 2016 No comments: