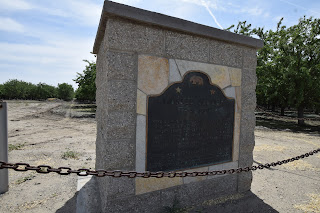 Last year I was teaching at a high school in the Central Valley of California. As you know from reading this blog, I like to find the local history in the places we live and visit. Earlier this summer I told you about the spot in the San Joaquin Valley where Murrieta was killed. Continuing with the wild west history of California, I tracked down the location of the shootout at Mussel Slough.

About five miles to the northwest of Hanford, California, in Kings County you will find California Historical Landmark #245, that is titled Location of the Famous Mussel Slough Tragedy. It's located on a country road almost indistinguishable from all of the other farm roads in the San Joaquin Valley. Don't drive too fast or you'll miss it. I believe I drove by it at least four times before I finally recognized it for what it was. The text on the monument reads:

Here on May 11, 1880, during a dispute over land titles between settlers and railroad, a fight broke out in which seven men - two deputy U.S. marshals and five ranchers lost their lives. The legal struggle over titles was finally settled by a compromise. Location: 5833 14th Ave, between Everett and Elder Aves, 1.5 miles SE of Hardwick.

It seems like a short description (in error) for what happened here. Especially since there are no original structures left, or even a tree that witnessed the event. Here's a summary of what happened.

In the nineteenth century the area was called the mussel slough region due to a slough off of the Kings River that backed into Tulare Lake. The lake and the slough are no longer present due to modern agriculture. The Southern Pacific Railroad was granted odd numbered lots of a square mile each as an incentive to build a line through the Central Valley of California. The line through this area was completed in 1872. Settlers had come into the area and homesteaded the even numbered lots and began to create improvements such as buildings, fencing, and irrigation ditches. This included hand-dug canals to bring water from the Kings River, more than two miles away for some.

In the meantime, the railroad put out brochures to sell the land they controlled. Farmers would be able to settle on the land for a few years, then gain title when a price was fixed. Brochures from the railroad advertised prices at $2.50 per acre and up. Of course the purchasers assumed that they were getting their land at that bargain price, and set about improving the land. When it came time to complete the transaction, the railroad insisted on valuing the land with improvements, inflating their asking price to twenty dollars an acre. After the railroad filed suit against settlers and won, the price inflated again up to $35 an acre. There was also an element of rancher versus farmer in that some cattlemen who had the wherewithal were stepping front of the farmers to purchase the improved land.

With the stage now set, on May 11, 1880 a meeting of settlers was being held when false rumors where spread that U.S. marshals were conducting evictions. The settlers grabbed their guns and went to intercept them. The truth was that a railroad appraiser, two potential buyers from the cattlemen's side, and a U.S. marshal along for protection, were driving around in a carriage looking at properties. The two belligerent parties met at the site of the monument, the homestead of one Henry Brewer. While the marshal and a leader of the group of farmers stepped off to talk about resolving the situation peacefully, the bad blood between the farmers and the two from the cattlemen's side spilled over. No one knows who shot first or even what was said to start it. But in the end, the two cowboys and five farmers were dead.

No marshals were killed despite what the marker says. Five farmers were convicted of interfering with a marshal in the performance of his duties, each spending eight months in jail and paid a $300 fine. Although there was a high level of animosity toward the railroads, the people could not get the government to change the policy of providing land grants to railroads. In the end, the railroads reduced their asking price a token amount and most of the settlers stayed on their land and paid the asking price. At the time of the incident, the dead and wounded were brought to the shade of a large oak tree on the property that was referred to as the "Tragedy Oak." It blew down in the 1990s. A piece of the tree is reportedly put on display in front of a local elementary school. Ultimately the fight was lost to history, with the exception of some local interest and fans of old west history.

The Mussel Slough Tragedy took on a bit of mythology over the years and like so many wild west gunfights there are multiple versions of what actually happened. The three that I consulted, each with a little bit different take, are the Wikipedia article on the incident, "Garden in the Sun: A History of the San Joaquin Valley 1772-1939" by William Seacrest, and "Hanford" (Images of America Series by Arcadia Publishing by Robin Roberts.

We decided to vacation in northern California a bit while on the way to Oregon this summer. While very scenic and awe inspiring (think big redwood trees), I was still able to fit in a little history tourism. I had just started the book on Ulysses Grant so we couldn't pass through Eureka without stopping off to visit Fort Humboldt, where Grant was stationed early in his army career.

Fort Humboldt State Historic Park is the site of the fort that was occupied from 1853 to 1870. The fort was built overlooking
Humboldt Bay to provide protection to gold seekers and arriving settlers from the local Native Americans. Captain Ulysses Grant was stationed here for a few months in 1854. At its peak, the fort had 14 buildings arranged around a parade field. For the troops stationed here, the duty was dull and boring.

We visited the park in early June and the weather was still very cool compared to the Central Valley of California where we had just come from. Being the "morning people" that we are, we arrived just before they opened the gate. Actually, it's a good thing we had Google Maps giving us the step-by-step directions, as the signage directing you to the site was not obvious. The gates opened at eight o'clock. The visitors center and the two buildings of the fort that remain were not scheduled to open until nine. We spent an hour and a half walking around the park, starting with a display of logging machinery that is co-located with the fort. The park is certainly well tended, but not well visited by all appearances. We pretty much had the park to ourselves with the exception of a local walking her dog and some high school kids on bicycles that I'm pretty sure were ditching the last day or two of school.

The buildings at the fort are the original hospital and a reconstructed surgeon's quarters. The hospital building has some displays on the history of the fort, but unfortunately they were not open during the time we were there. I guess that the park is staffed by volunteers and they were having a late morning. It was disappointing, but the main thing to see when you visit a historic site is actually the location and the lay of the land. The fort is on a bluff and today the city of Eureka has grown around the bay that the fort overlooks. It is obvious that the fort is defensible with a small number of soldiers (I believe that less than 50 were typically at the fort), and the view allows for easily spotting arriving ships.

Probably the best part of visiting Fort Humboldt State Historic Park is knowing that you are walking on the same ground as U.S. Grant, George Crook, and other noteworthy soldiers from the Civil War period. You also gain a glimpse into what their living conditions were while serving in what was then still a far off place, well removed from the civilization in the East that these soldiers were used to.

a visit to Fort Vancouver, another frontier outpost where Grant served before his civilian hiatus from the army.