This book “Recommendation and Review” is for “Agent Sonya” by Ben Macintyre. 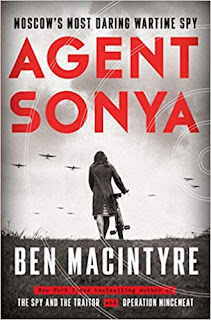 I am a Cold War veteran, having spent three years patrolling the East German border back in the 1980s. Maybe that’s why I like spy stories so much. Fiction or nonfiction, it doesn’t matter. At least from a media standpoint, the Cold War made for some good spy stories. You had definitive bad guys (that would be the Soviets) versus us, the good guys. This book isn’t like that.

“Agent Sonya: Moscow’s Most Daring Wartime Spy” by Ben Macintyre is the true story of Ursula Kuczynski, also known as Ruth Werner, Ursula Beurton, Ursula Hamburger, or her code name: Sonya. She was born in Germany in 1907 and was a teenager and young adult during the political upheaval immediately following World War I. She became a devout, ideological communist, passionately opposed to the rise of fascism in her country. When her husband was offered a job in Shanghai, she went with him. There in China, she met other communists and was recruited into working for Soviet intelligence. Over her career worked in China, Poland, Switzerland, and Great Britain. Although Sonya didn’t “spy” firsthand, she did run agents in these locations and radio information back to Moscow.

I’ve read books by Ben Macintyre before, specifically Rogue Heroes and Agent Zigzag. So I knew the writing would be excellent and that this book, like the others mentioned, would be a true story that reads like fiction. What makes this book different from the usual spy story is that it is told from the perspective of Kuczynski. I gained an understanding of why a person would embrace Communism during the 1920s, especially if faced with a weak government (the Weimar Republic) and a threat of Fascism. As an aside, Ursula became disillusioned with the Soviet Union after the purges by Stalin in the 1930s, but she never lost her idealistic faith in communism. During the story of her career as a spy during the 30s and 40s, you of course sympathize with Ursula and are on the virtual edge of your seat during the times she was nearly caught.

SPOILER ALERT! If you don’t want to know the rest of the story, skip the next paragraph.

Why a book devoted to this one spy? One of her agents she ran in Great Britain was another German Jew, a talented physicist by the name of Klaus Fuchs. Fuchs had escaped from Hitler’s Germany and was sponsored into Great Britain. He was investigated and cleared to work on Britain’s atomic bomb project, despite being a devout communist. Once Fuchs realized what the project was about, he decided to share all the information about his work with the Soviet Union. Agent Sonya was his handler in Great Britain. When Great Britain’s nuclear bomb program was merged with the Manhattan Project (the United States nuclear bomb project), Fuchs was sent to work in the U.S. and passed off to a KGB handler in America. The information that Fuchs passed to the Soviets arguably gave them the bomb or certainly allowed them to develop their own five years earlier than expected. When Fuchs' treachery was found out, it would lead straight back to Ursula. In 1950 she escaped Great Britain and settled into retirement in East Germany, eventually writing a book about her own escapades.

So you have to ask: Did Agent Sonya help to start the Cold War or did she prevent World War III by helping to maintain a balance of power? Don’t try to answer that question without reading the book. I think it will change the way you look at that period of our history. It did mine.